Justice for the PayPal WikiLeaks protesters: why DDoS is free speech

The US justice department is prosecuting Anonymous hacktivists as felons, but DDoS protest must get first amendment protection 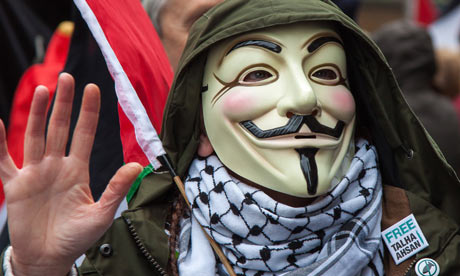 Prosecution of online activity has not been commensurate to comparable protests, like the various sit-ins of the Occupy movement. Nash/Demotix/Corbis

There is no weapon on the planet more powerful than speech.

While affixing your e-signature to an online petition is a new and somewhat direct way to "petition your government for a redress of grievances", I am most concerned with advocating for more immediate and effective manners of protest. So naturally, I was interested when, in December 2010, the hacktivist collective Anonymous voiced their displeasure with PayPal, over that company's part in the banking blockade of Wikileaks.

A reported 10,000 protesters around the world took to the internet with a protest method known as DDoS (distributed denial of service) – the functional equivalent of repeatedly hitting the refresh button on a computer. With enough people refreshing enough times, the site is flooded with traffic, slowed, or even temporarily knocked offline. No damage is done to the site or its backing computer system; and when the protest is over, the site resumes business as usual.

This is not "hacking". It is protest, and it is speech.

True, customers of the site are temporarily inconvenienced, but democracy is often messy and inconvenient. Moreover, the voice of your fellow citizen should always be worth slowing down to hear for a moment. Exposure to new or differing views enriches us all. Such was the case with the 2010 PayPal DDoS protest.

Or it was … until the United States government decided to serve 42 warrants and indict 14 protesters. While protest charges have typically been seen as tantamount to nuisance crimes, like trespassing or loitering, these were different. The 14 PayPal defendants, some of whom were teenagers when the protest occurred, find themselves looking at 15 years in federal prison – for exercising their free speech rights; for redressing their grievances to PayPal, a major corporation; for standing up for what they believed was right.

Instead of being handed a $50 fine, as one would face for traditional protest crimes such as a sit-in, the PayPal defendants' freedoms are in real jeopardy. To address this situation, there was some more traditional, yet still modern speech aimed at the White House. An online petition has been launched, asking that DDoS be treated as speech – a concept I wholeheartedly support. Being mindful that all protest must be reasonable in time, place, and manner, I believe that there is room in cyberspace, indeed in the world, for this type of protest activity.

The example of the PayPal protest provides a good analogy for why DDoS is speech. In the 1960s, civil rights protesters went to the Woolworth's lunch counter in the segregated American south because they sought to make a point by asserting their right to buy a simple meal – much as protesters went to PayPal because they wanted to donate to WikiLeaks. In Woolworth's, the protesters made plain their goal: "If you serve me a meal, I will eat it, pay for it, and then I will leave." This concept was lost on the Jim Crow south, so protest became necessary.

Certainly, our contemporary situation is a long way from that struggle against deep, historic injustice – no one suggests otherwise – but the analogy is apt nonetheless. Thousands of PayPal protesters said, via their protest speech in DDoS form: "I want to make a donation to WikiLeaks; I'll take up my bandwidth to do that, then I'll leave. You'll make money, I'll feel fulfilled, everyone wins."

Alas, PayPal and its parent company, eBay, were not in the win-win business. They were in the censorship business, which is not something Anonymous suffers lightly – especially as PayPal has a history of taking donations for questionable organizations, like the National Vanguard (a national socialist group) and Americans for the Truth About Homosexuality (an anti-LGBT group), yet won't process donations for WikiLeaks.

So, it came to pass that thousands of displeased people, all around the globe, expressed their outrage via a DDoS protest. All the PayPal protesters did was take up some bandwidth. PayPal claimed – almost as a cry of victory – that their site never even went offline. In that example, DDoS was used as an almost pure form of protest expression – therefore it was speech and should be recognized and protected as such. The law should be changed.

The Computer Fraud and Abuse Act is thus being used to stifle new and creative forms of online expression. This type of harmless creative protest should be encouraged: our nation was built upon the principles of free speech. If the founders of this great nation saw its laws abused, as when applied to these minor protests, I think they would be shocked and offended.

Our best and brightest should be encouraged to find new methods of expression; direct action in protest must not stifled. The dawning of the digital age should be seen as an opportunity to expand our knowledge, and to collectively enhance our communication. Government should have the greatest interest in promoting speech – especially unpopular speech. The government should never be used to suppress new and creative – not to mention, effective – methods of speech and expression.

Since the PayPal prosecution, there have been no DDoS protests on that scale. Speech has been chilled.

"Restriction of free thought and free speech is the most dangerous of all subversions. It is the one un-American act that could most easily defeat us."

Toward that end, it's time to begin a conversation about acknowledging DDoS as legitimate protest speech, deserving of first amendment protection.

Justice for the PayPal WikiLeaks protesters: why DDoS is free speech | Jay Leiderman

We Own The Weekend

Latest news, views and links from Comment is free journalists and editors

Find the latest jobs in your sector: