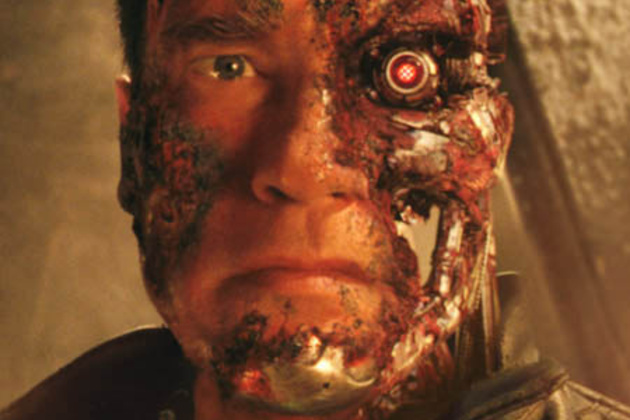 Remember in the original Terminator when the cyborg assassin played by Arnold Schwarzenegger gets part of his face blown off? Remember how his humanoid eye is all janky and he has to cut it out of his face with a razor blade, revealing his true, glowing-red, bionic eyeball underneath? Wouldn’t you like to have that kind of versatility?

It is perhaps a stretch to say that now you can. But, in a sense, now you can. Yesterday, the United States Department of Energy announced that national research laboratories had finally created a bionic eye to meet Food and Drug Administration standards. And so our transformation into human-cyborg hybrids takes another giant step forward.

It’s worth clarifying just what kind of bionic eyeball we’re talking about here, because computers and eyeballs have getting pretty cozy lately. Google Glass lets people video chat, look at maps and the web, take photos, and walk down fashion runways looking hot, all per some strategic eyeball glancing. As fellow Motherboarder, Adam Estes, noted here a few months back, eyeballs are controlling all sorts of devices like laptops, tablets and—awesomest of all—TVs.

Though it is certainly not inconceivable that the new FDA-approved bionic eyeballs could one day be connected to a computer other than your brain, the information they process is just going one place for now: the optic nerve. For now, in other words, they simply help you see.

But the way it’s designed opens up some interesting possibilities that indicate much deeper eye-computer integration is well within reach. That’s because the bionic eyeball sends its input to an external processor before it’s converted into the kinds of electric pulses the optic nerve—and, hence, the brain—can understand.

The DOE, which dumped $75.2 million worth of funding over ten years into the project, explains the Argus II— presumably named for the Greek mythological figure who possessed multiple eyes—thusly:

The Argus II can partially restore the sight of blind individuals after surgical implantation. Clinical trials demonstrated that totally blind individuals could safely use the device to successfully identify the position and approximate size of objects and detect movement of nearby objects and people.

The Argus II operates by using a miniature camera mounted in eyeglasses that captures images and wirelessly sends the information to a microprocessor (worn on a belt) that converts the data to an electronic signal and transmits it to a receiver on the eye. The pulses travel to the optic nerve and, ultimately, to the brain, which perceives patterns of light and dark spots corresponding to the electrodes stimulated. Blind individuals can learn to interpret these visual patterns.

Minus the red laser beam, it sounds a lot like that Terminator eyeball.

I like weird psych stuff and am a bit of a gear head. If something has connecting parts, like neurons or motorcycle carburetors, I'm probably into it. I'm also on Google Plus.