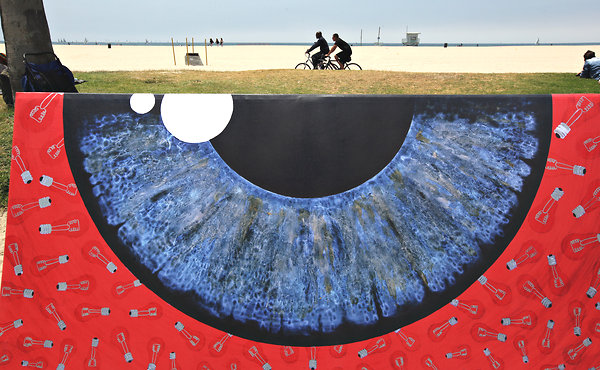 A painting for sale on the boardwalk in the Venice section of Los Angeles, where Google has set up offices and may lease more space. More Photos »

But Venice might have met its match in what many see as its most unsettling threat yet: Google.

“As soon as I walked in, they said: ‘You heard about Google? Why don’t you have your staff look into this?’ ” former Gov. Arnold Schwarzenegger, who began his professional career as a bodybuilder here 44 years ago, said after he emerged from a throng of worried muscle-bound admirers at Gold’s Gym. “It’s this conspiracy theory: ‘Google is coming! They are going to take over and wipe out our bodybuilding.’ ”

In November, Google moved an army of sales and technology employees into 100,000 square feet in two Venice buildings. It is negotiating leases on another 100,000 square feet, according to real estate agents. That includes the 31,000-square-foot expanse that is Gold’s Gym, the very bodybuilding symbol of Venice, if not the universe, where Mr. Schwarzenegger stopped by the other morning.

No matter that Google officials said they had no plans to displace the fabled gym. Although a spokesman, Jordan Newman, said, “We’re not taking over Gold’s,” the company’s reluctance to talk about its long-term ambition for Venice, or why it would want anything to do with the Gold’s building, has stirred a storm of speculation and anxiety.

“They’ll buy it, they’ll kick us out, and we’ll have to relocate,” said Jerry Martin, a bodybuilder standing in front of the gym.

Nathanial Moon, bulging with muscles, called it “the ultimate revenge of the nerds, the greatest way of getting back at all the guys that stuffed people from Google into lockers from high school and stole all their prom dates. And you can’t fight against Google, because they’ve got billions of dollars.”

People are even beginning to refer to Venice — the Venice of movies, surfing and Muscle Beach — as Silicon Beach. That may sound like progress to some, but not to those along the boardwalk, where a synagogue shares the same strip of sidewalk with a freak show advertising a two-headed turtle.

“I don’t want to see Venice look like Santa Monica,” said DeAlphria Tarver, 26, who was selling handmade hats on a boardwalk crammed with vendors, stragglers and skateboarders as homeless people slept on the adjacent grass. Google, she said, will “want it to look a lot more polished, and not hippielike.”

Mr. Schwarzenegger said that the community was “freaking out” and that he appreciated why. “Google has bought everything in Venice that is available,” said the former governor, who has been buying and selling buildings here for close to 30 years.

But he welcomes Google as a neighbor and said the fears that it would turn Venice into a sanitized Silicon Valley on the Pacific were exaggerated. “This is the mecca of bodybuilding,” he said. “They will never leave.”

Mr. Schwarzenegger may well be Venice’s biggest fan, as he demonstrated during a two-hour tour of the place he came to as an aspiring bodybuilder and where he still keeps his office. Unabashedly nostalgic, he pointed out the fading remains of the sign on an old Gold’s Gym building; the wall outside the onetime home of Rudolph Valentino that he built as a bricklayer; and the outdoor gym at Muscle Beach, where he happily posed for pictures. (“Excuse me, are you the Terminator?” one boy asked nervously.)

Even as governor, Mr. Schwarzenegger preferred to greet out-of-town visitors at his private office, arguing that Venice presented a better face of California than, say, Sacramento. And most weekends, when he is not acting in movies, he comes here from his Brentwood estate for a bicycle ride down the boardwalk. Or tries to.

“There are days when we can’t get through,” he said. “It’s wild, because the homeless wake up in the morning when you get there. They are there with their bags. They are coming out of holes and places. And you smell the incense. The touch of the ’60s is all there, and all the street vendors are coming out.”

“This place is insane,” he said. “You never have to smoke a joint in Venice. You just go on a bicycle ride in the morning, you just inhale, and you live off everyone else.”

Venice today is hardly like the community Mr. Schwarzenegger found when he first arrived, drawn by a promise of “nice buildings and hotels, kind of like a French Riviera type of look,” he said. “But when I got here, it was totally like a dump. It was dreadful.”

As recently as early 2006, it was still regarded as dangerous. Drug dealers could be found at all hours at Oakwood Park. Prostitutes roamed the surrounding streets wearing bright-red heels and leopard-print miniskirts. Crack cocaine addicts, their faces welted with sores, staggered along sidewalks that were broken or littered with trash.

But a crackdown by the Los Angeles Police Department helped transform Venice, as officers aided by helicopters swept out drug dealers and gangs. Abbot Kinney Boulevard, once just another forlorn Venice street, was named “The Coolest Block in America” by GQ magazine in its Style Bible this spring. There are plans to build a 720-foot-long zip line over the boardwalk.

Mr. Newman said Google had no desire to pick a fight with the bodybuilders. But the bodybuilders were not buying that. “If you don’t want the building, leave it alone,” said Big Will Harris.

In truth, Google may not be the only culprit here. The old World Gym at the top of Abbot Kinney, the place that was Mr. Schwarzenegger’s gym, has been bought. World’s is gone, and the space is being transformed into high-end shops and offices. The new owner and future tenant?

A version of this article appeared in print on June 20, 2012, on page A1 of the New York edition with the headline: Venice Beach Bodybuilders Fear Google Is Kicking Sand at Them.