The Jeopardy-playing supercomputer is interesting in doing more than sparring with Alex Trebek. So it's going into business.

FORTUNE -- Beating lowly humans on Jeopardy was just the beginning. IBM's famed Watson supercomputer will soon be available as a commercialized analytics tool for data-heavy industries like healthcare, telecom and financial services.

It's been one year since Watson followed in the footsteps of its chess-playing predecessor Deep Blue and proved -- just in case anyone had a doubt -- that machines are smarter than people. Now, Watson's first pilot customer, Indianapolis-based insurance company WellPoint (WLP), is getting ready to take the massive analytics engine for a test drive. More beta customers (spanning both healthcare and financial services) will follow in the next few months, according to IBM's (IBM) general manager of Watson Solutions, Manoj Saxena.

Watson was the result of IBM's years-long quest to build a natural language processing machine that could answer questions with speed and accuracy. The computing cluster, comprised of 90 servers, made its debut on Jeopardy last year. But it wasn't just a game show gimmick. IBM plans to sell Watson as a cloud-based service companies can tap to find answers in disparate data sets. For example, a financial services firm could use it to sift through news reports and market research to find likely acquisition targets. Or a healthcare company could utilize Watson to process medical articles, prior cases and even a patient's own medical history and identify the most likely diagnosis and best course of treatment.

Of course, data analytics is nothing new. But the terabytes upon terabytes of unstructured data in the world (including Tweets, Facebook updates and Amazon (AMZN) reviews) is unprecedented. According to IBM's Saxena, 90% of the world's information was generated in the last two years. Producing data is much easier than making sense of it. That's where Watson and other next-generation analytics tools come in. The supercomputer can process 200 million web pages in three seconds. What's more, it can understand human language. Think of it as the iPhone's Siri, Apple's (AAPL) intelligent personal assistant, on intergalactic steroids. In fact, Saxena says users will someday be able to access Watson from their smartphone or tablet. He also plans to "teach" Watson different languages, including Japanese and French, so it could work for customers abroad.

But while Watson has game-changing potential as an enterprise product, most companies are just starting to deploy so-called "big data" projects, and aren't ready for a heavy-duty analytics engine like Watson. To that end, IBM is rolling out "Ready for Watson," a program to get companies set up with basic analytics applications.

Analytics is a big part of IBM's long-term strategy. Over the past five years, the company has invested $14 billion in analytics-related acquisitions, including SPSS, Cognos and Netezza. By 2015, IBM expects it will rake in $16 billion from the analytics products it sells, including Watson. In the meantime, IBM competitors like Oracle (ORCL) and SAP (SAP) aren't sitting still and have made their own large-scale acquisitions in this space. And while they may not have a supercomputer of Watson's fame, it's way too early to call it a game.

Join the Conversation
Most Popular
About This Author

Based in Silicon Valley, Michal Lev-Ram covers enterprise and mobile technologies for FORTUNE. Prior to joining FORTUNE, she wrote for CNNMoney, Fast Company, Popular Science and other business and technology publications. She was also a staff writer at Business 2.0 and holds a B.A. in journalism from San Francisco State University. 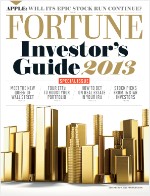