Turning Point: The top E.U. court orders Google to grant the “right to be forgotten.'’

It is now a journalistic cliché to remark that George Orwell’s “1984” was “prophetic.” The novel was so prophetic that its prophecies have become modern-day prosaisms. Reading it now is a tedious experience. Against the omniscient marvels of today’s surveillance state, Big Brother’s fixtures — the watchful televisions and hidden microphones — seem quaint, even reassuring.

Everything about the world Orwell envisioned has become so obvious that one keeps running up against the novel’s narrative shortcomings.

I am more impressed with another of his oracles: the 1945 essay “You and the Atomic Bomb,” in which Orwell more or less anticipates the geopolitical shape of the world for the next half-century. “Ages in which the dominant weapon is expensive or difficult to make,” he explains, “will tend to be ages of despotism, whereas when the dominant weapon is cheap and simple, the common people have a chance ... A complex weapon makes the strong stronger, while a simple weapon — so long as there is no answer to it — gives claws to the weak.” 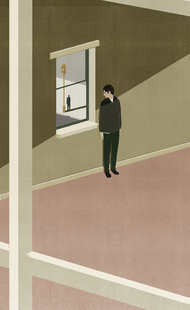 Describing the atomic bomb (which had only two months before been used to flatten Hiroshima and Nagasaki) as an “inherently tyrannical weapon,” he predicts that it will concentrate power in the hands of the “two or three monstrous super-states” that have the advanced industrial and research bases necessary to produce it. Suppose, he asks, “that the surviving great nations make a tacit agreement never to use the atomic bomb against one another? Suppose they only use it, or the threat of it, against people who are unable to retaliate?”

The likely result, he concludes, will be “an epoch as horribly stable as the slave empires of antiquity.” Inventing the term, he predicts “a permanent state of ‘cold war,"’ a “peace that is no peace,” in which “the outlook for subject peoples and oppressed classes is still more hopeless.”

There are parallels between Orwell’s time and ours. For one, there has been a lot of talk about the importance of “protecting privacy” in recent months, but little about why it is important. It is not, as we are asked to believe, that privacy is inherently valuable. It is not.

The real reason lies in the calculus of power: the destruction of privacy widens the existing power imbalance between the ruling factions and everyone else, leaving “the outlook for subject peoples and oppressed classes,” as Orwell wrote, “still more hopeless.”

The second parallel is even more serious, and even less well understood. At present even those leading the charge against the surveillance state continue to treat the issue as if it were a political scandal that can be blamed on the corrupt policies of a few bad men who must be held accountable. It is widely hoped that all our societies need to do to fix our problems is to pass a few laws.

The very concept of the Internet — a single, global, homogenous network that enmeshes the world — is the essence of a surveillance state. The Internet was built in a surveillance-friendly way because governments and serious players in the commercial Internet wanted it that way. There were alternatives at every step of the way. They were ignored.

At their core, companies like Google and Facebook are in the same business as the U.S. government’s National Security Agency. They collect a vast amount of information about people, store it, integrate it and use it to predict individual and group behavior, which they then sell to advertisers and others. This similarity made them natural partners for the NSA, and that’s why they were approached to be part of PRISM, the secret Internet surveillance program.

Unlike intelligence agencies, which eavesdrop on international telecommunications lines, the commercial surveillance complex lures billions of human beings with the promise of “free services.” Their business model is the industrial destruction of privacy. And yet even the more strident critics of NSA surveillance do not appear to be calling for an end to Google and Facebook.

Recalling Orwell’s remarks, there is an undeniable “tyrannical” side to the Internet. But the Internet is too complex to be unequivocally categorized as a “tyrannical” or a “democratic” phenomenon.

When people first gathered in cities, they were able to coordinate in large groups for the first time, and to exchange ideas quickly, at scale. The consequent technical and technological advances brought about the dawn of human civilization.

Something similar has been happening in our epoch. It is possible for more people to communicate and trade with others in more places in a single instant than it ever has been in history. The same developments that make our civilization easier to surveil make it harder to predict. They have made it easier for the larger part of humanity to educate itself, to race to consensus, and to compete with entrenched power groups.

This is encouraging, but unless it is nurtured, it may be short-lived.

If there is a modern analogue to Orwell’s “simple” and “democratic weapon,” which “gives claws to the weak” it is cryptography, the basis for the mathematics behind Bitcoin and the best secure communications programs. It is cheap to produce: cryptographic software can be written on a home computer. It is even cheaper to spread: software can be copied in a way that physical objects cannot. But it is also insuperable — the mathematics at the heart of modern cryptography are sound, and can withstand the might of a superpower. The same technologies that allowed the Allies to encrypt their radio communications against Axis intercepts can now be downloaded over a dial-up Internet connection and deployed with a cheap laptop.

Whereas in 1945, much of the world faced a half-century of tyranny as a result of the atomic bomb, in 2015, we face the inexorable spread of invasive mass surveillance and the attendant transfer of power to those connected to its superstructures. It is too early to say whether the “democratizing” or the “tyrannical” side of the Internet will eventually win out. But acknowledging them — and perceiving them as the field of struggle — is the first step toward acting effectively.

Humanity cannot now reject the Internet, but clearly we cannot surrender it either. Instead, we have to fight for it. Just as the dawn of atomic weapons inaugurated the Cold War, the manifold logic of the Internet is the key to understanding the approaching war for the intellectual center of our civilization.

Julian Assange is the founder of WikiLeaks and the author of the recently published “When Google Met WikiLeaks.”