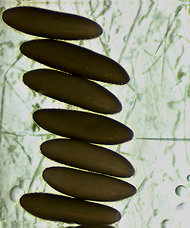 Oxitec injected DNA into mosquito eggs to modify the species.

Connect With Us on Social Media

Researchers on Sunday reported initial signs of success from the first release into the environment of mosquitoes engineered to pass a lethal gene to their offspring, killing them before they reach adulthood.

The results, and other work elsewhere, could herald an age in which genetically modified insects will be used to help control agricultural pests and insect-borne diseases like dengue fever and malaria.

But the research is arousing concern about possible unintended effects on public health and the environment, because once genetically modified insects are released, they cannot be recalled.

Authorities in the Florida Keys, which in 2009 experienced its first cases of dengue fever in decades, hope to conduct an open-air test of the modified mosquitoes as early as December, pending approval from the Agriculture Department.

The Agriculture Department, meanwhile, is looking at using genetic engineering to help control farm pests like the Mediterranean fruit fly, or medfly, and the cotton-munching pink bollworm, according to an environmental impact statement it published in 2008. Millions of genetically engineered bollworms have been released over cotton fields in Yuma County, Ariz.

Yet even supporters of the research worry it could provoke a public reaction similar to the one that has limited the acceptance of genetically modified crops. In particular, critics say that Oxitec, the British biotechnology company that developed the dengue-fighting mosquito, has rushed into field testing without sufficient review and public consultation, sometimes in countries with weak regulations.

“Even if the harms don’t materialize, this will undermine the credibility and legitimacy of the research enterprise,” said Lawrence O. Gostin, professor of international health law at Georgetown University.

The first release, which was discussed in a scientific paper published online on Sunday by the journal Nature Biotechnology, took place in the Cayman Islands in the Caribbean in 2009 and caught the international scientific community by surprise. Oxitec has subsequently released the modified mosquitoes in Malaysia and Brazil.

Luke Alphey, the chief scientist at Oxitec, said the company had left the review and community outreach to authorities in the host countries.

“They know much better how to communicate with people in those communities than we do coming in from the U.K.” he said.

Dr. Alphey was a zoology researcher at Oxford before co-founding Oxitec in 2002. The company has raised about $24 million from investors, including Oxford, he said. A major backer is East Hill Advisors, which is run by the New England businessman Landon T. Clay, former chief executive of Eaton Vance, an investment management firm.

Oxitec says its approach is an extension of a technique used successfully for decades to suppress or even eradicate pests, which involves the release of millions of sterile insects that mate with wild ones, producing no offspring.

But the technique has not been successfully used for mosquitoes, in part because the radiation usually used to sterilize the insects also injures them, making it difficult for them to compete for mates against wild counterparts.

Oxitec has created Aedes aegypti mosquitoes, the species that is the main transmitter of the dengue and yellow fever viruses, containing a gene that will kill them unless they are given tetracycline, a common antibiotic.

In the lab, with tetracycline provided, the mosquitoes can be bred for generations and multiplied. Males are then released into the wild, where tetracycline is not available. They live long enough to mate but their progeny will die before adulthood.

The study published on Sunday looked at how successfully the lab-reared, genetically modified insects could mate. About 19,000 engineered mosquitoes were released over four weeks in 2009 in a 25-acre area on Grand Cayman island.

Based on data from traps, the genetically engineered males accounted for 16 percent of the overall male population in the test zone, and the lethal gene was found in almost 10 percent of larvae. Those figures suggest the genetically engineered males were about half as successful in mating as wild ones, a rate sufficient to suppress the population.

Oxitec has already said a larger trial on Grand Cayman island in 2010 reduced the population of the targeted mosquito by 80 percent for three months. That work has not yet been published.

A version of this article appeared in print on October 31, 2011, on page B1 of the New York edition with the headline: Mosquito Bred to Fight Dengue Fever Shows Promise in a Field Test.