Cambridge University's "Terminator studies" department – do we really need it?

Cambridge University is to launch a centre for the study of existential risks to the human race – including the rogue robot scenario depicted in the Terminator films. The astronomer royal, co-founder of the centre, explains why it's necessary 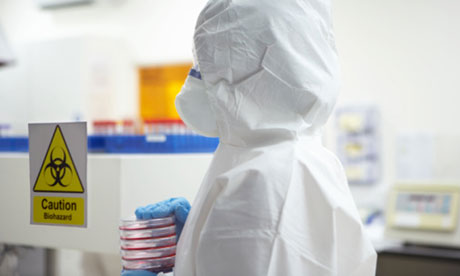 The new Cambridge centre will look at the risk of bioterror. Photograph: Adam Gault/Getty Images

We are a risk-averse society. But there's a mismatch between public perception of very different risks and their actual seriousness. We fret unduly about carcinogens in food and low-level radiation. But we are in denial about low-probability high-consequence events that should concern us more. The recent financial crash was one such; but others that haven't yet happened – and which may look larger in coming decades – deserve more attention. Such events may be unlikely, but could be so catastrophic that even if they happen once, that is too often.

Over most of history, threats have come from nature – disease, earthquakes, floods, and so forth. But the worst now come from us. We've entered a geological era called the anthropocene. This started, perhaps, with the invention of thermonuclear weapons. Throughout the cold war, we were at risk of a catastrophe that could have set back our civilisation for decades or more. There's now less threat of this – though the chance of regional nuclear conflict is higher.

Some global hazards are insidious. They stem from pressure on energy supplies, food, water and other natural resources. And they will be aggravated as the population rises to a projected nine billion by mid-century, and by the effects of climate change. An "ecological shock" could irreversibly degrade our environment.

Almost all innovations entail risks: in the early days of steam, people died when poorly designed boilers exploded. But something has changed. If a boiler explodes, it's horrible but there's a limit to just how horrible. But new hazards are emerging that could be so catastrophic that even a tiny probability is disquieting. For instance, global society depends on elaborate networks – electricity grids, air traffic control, international finance, just-in-time delivery and so forth. Unless these systems are highly resilient, their manifest benefits could be outweighed by catastrophic (albeit rare) breakdowns cascading through the system. And the threat is terror as well as error; concern about cyber-attack, by criminals or by hostile nations, is rising sharply. Synthetic biology, likewise, offers huge potential for medicine and agriculture – but it could facilitate bioterror. And, looking further ahead, we should even consider the sci-fi scenario that a network of computers could develop a mind of its own and threaten us all.

I'm worried that in 2050 we'll be desperately trying to minimise these existential risks. It's not too soon to start thinking about them – even though they are imponderable, and hard to quantify. So I'm delighted that my Cambridge colleague, the philosopher Huw Price, has taken the initiative to gather a cross-disciplinary group to address these issues.

Short link for this page: http://gu.com/p/3c4qq

Cambridge University's "Terminator studies" department – do we really need it?

More from Shortcuts on

Get the latest news from our education team on Twitter